Floods are the most frequent disasters in Bangladesh, which not only lead to immense sufferings to people affected by it but also cause considerable damage to livelihoods and assets. To reduce the impact of floods, Bangladesh has gradually shifted from a reactive emergency response approach to more proactive preparedness and risk reduction. Forecast-based Early Action (FbA) is an innovative approach that enables communities to take actions in anticipation of a disaster. FbA depends on a number of factors; availability of locally applicable and reliable forecasts, pre-defined triggers or thresholds for action, a set of protocols with clear roles and responsibilities, and pre-identified set of early actions. Furthermore, suggested early actions can be supported through financing mechanisms which are made available ahead of an emergency. 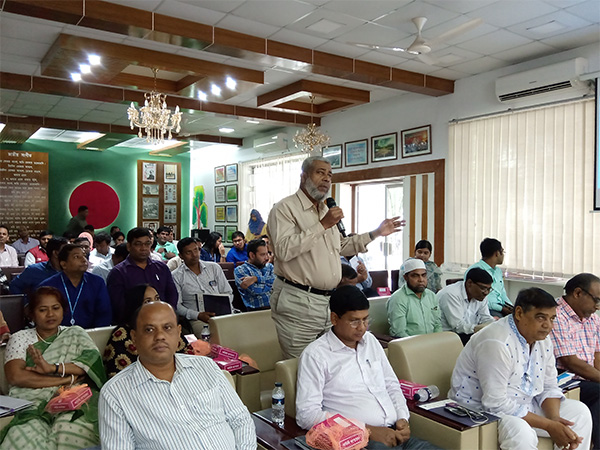 Md. Mohsin highlighted the change in discourse from actions taken after a disaster to actions taken early, in anticipation of an event. “With regards to disaster risk management, Kurigram District has progressed greatly through activities of the Government and other organizations. We want to highlight the voices from the regional levels and not just the national ones. Thus, there needs to be sharing of knowledge and activities at all levels from national to local.”- said Md Mohsin,

SUFAL will implement the FbA approach for floods in three northern flood-prone districts: Kurigram, Gaibandha and Jamalpur over the period from August 2019 to January 2021. Flood forecasting and early warning systems will be strengthened through facilitating impact-based forecasting to predict likely impacts; and by developing an institutionalised mechanism to provide guidelines on the roles and responsibilities of government, local stakeholders, and communities in taking early actions, emphasising the protection of most vulnerable groups. Speaking at the event, Assistant Country Director, CARE Bangladesh, Prabodh Devkota shared that, CARE Bangladesh is extremely happy to partner with the government and other stakeholders and further added, “The event is strategic to contextualize FbA at the regional level. All stakeholders must be involved and utilize SUFAL as an opportunity to collectively engage and contribute, so that we will be able to ground FbA in reality and learn collectively”.

Since the start of SUFAL project, the revised Standing Orders on Disaster 2019 has been endorsed by the Government which clearly mentions the need for ‘Implementation of FbF/A’. While this reflects the willingness of Government in applying the FbA approach, a lot of work remains in unpacking the process for decision-making and implementation of early actions, financial mechanisms, and capacity building, particularly at subnational and local levels. Learnings from the SUFAL project will support the Government’s capacity to effectively take early actions for floods.