‘Supporting Flood Forecast-based Action and Learning in Bangladesh’ (SUFAL) is a consortium project funded by the European Union Civil Protection and Humanitarian Aid Operations (ECHO), that worked in three north-western districts of Bangladesh to reduce the impact of probable flood by taking forecast based early actions. The project is led by CARE Bangladesh with Concern Worldwide, Islamic Relief Bangladesh and Regional Integrated Multi-Hazard Early Warning System for Africa and Asia (RIMES).

The objective of the project is to reduce the vulnerability of flood-affected people by using early messaging mechanism that triggers funding and thus subsequent preparatory measures can be taken. Through this project, CARE Bangladesh contributes to Government of Bangladesh's ability to rapidly respond to annual floods.

The anticipatory actions under this project reduces the impact of flood on the communities, improve the effectiveness of emergency preparedness, response and recovery efforts, thereby reducing the humanitarian burden. Furthermore, the project works to improve the ability of respective institutions to receive and understand early warnings and enhance their capacity for timely action in line with the national Standard Operating Procedures (SOPs).

Being a riverine country, Bangladesh sees at least two episodes of flood and flash flood each year in the North and North-Western regions. Life becomes really difficult for the locals in this region in monsoon as the flood water inundates the main roads and walkways that connect the locality to the markets, schools, hospitals and other establishments. 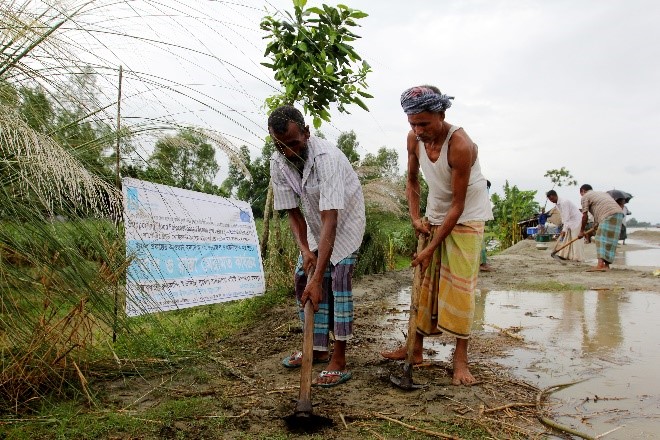 With an objective to reduce the impact of flood and improve the resilience of the community, the project aids in repairing minor damages to embankments, roads, and evacuation routes to enable the mobility of flood-affected individuals in the most vulnerable areas. The vulnerable locations are identified with support from Disaster Management Committees (UDMC).

Kulkandi - Muradabad embankment in Islampur sub-district of Jamalpur district in greater Mymensingh Division was one such area that needed repairing to be able to survive the heavy monsoon in 2020. By the UDMC and the community, the project began repair work as soon as the flood warning was issued. By using local human resources through cash for work schemes and co-financing from Kulkandi Disaster Management Committee; the task was completed in 960 person-days at a cost of BDT 290,000 (USD 3,419). Later, the community reported that even though the 2020 monsoon flood was one of the worst in recent years where one-third of the country got inundated, Kulkandi Union faced less impact as the embankment was repaired in due time given the early forecast.

Prior to the flood, the project also coordinated the repair of a key road in adjacent Noarpara union that connects to the village market. It was the only means to reach to Islampur sub-district in greater Mymensingh Division. “We fixed the road right before the flood water could approach this area.”, said Ali, who took part in the cash-for-labor initiative.