Not marriage, empowerment is the key to a bright future 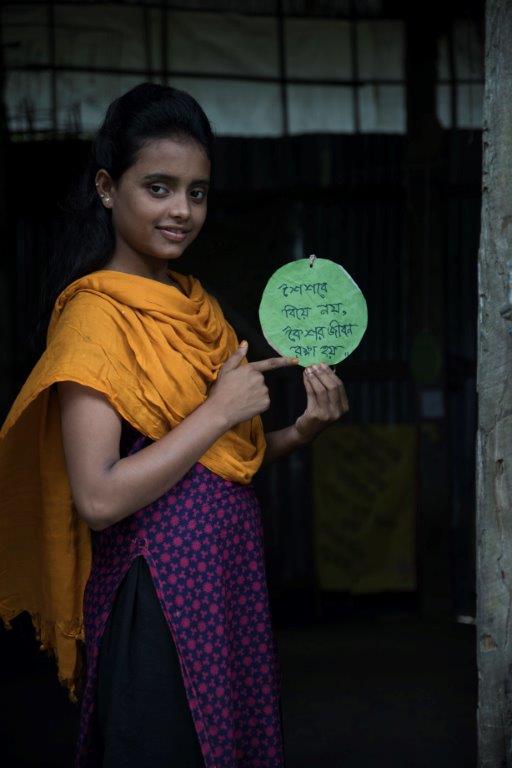 It is hard to believe that Bangladesh still has some of the highest rates of child marriage worldwide. More than half of all girls in Bangladesh get married early before the legal age of 18. For most, it is not a choice; societal norms and various socio-economic conditions play a key role in determining the fate of young girls. Child, Early, and Forced Marriages (CEFM) deprive women and girls of equal opportunities and fundamental human rights. It threatens their lives and future and takes away their right to education, making them more vulnerable to violence and abuse while restricting their opportunity to make decisions and choices for themselves and their families. Early marriage often leads to early pregnancy and childbirth, resulting in higher mortality and morbidity rates. The consequences and negative impacts of CEFM are long-lasting, preventing our sustainable development and prosperity goals for the nation.

For the past 72 years, CARE Bangladesh has been working side by side with the people of Bangladesh to combat poverty and achieve social justice. Our work centers around women and girls because CARE's core belief is that poverty cannot be overcome until everyone has equal rights and opportunities, and women and girls make up for more than half of the global population. Our work in Bangladesh ranges from supporting maternal health and well-being, food and nutrition, poverty eradication, emergency response, disaster mitigation, and more, with a core focus on women empowerment integrated into each of our programs.
CAREâs approach to addressing social norms for ending child, early and forced marriages is unique and impactful. Addressing the root causes of CEFM is central to CAREâs work so that women and girls are able to achieve social and economic justice, receive opportunities to make informed choices, and have opinions on their lives and livelihood. In Bangladesh, we are currently working across multiple projects to prevent early and forced marriages.
Sadly, with the onset of the COVID-19 pandemic, early and child marriages have increased in Bangladesh, taking us a few steps back in progress we made in the past few years. Whilst there have been years of high-level engagement from the Government as well as various policy frameworks and grass root level interventions to combat CEFM, it is now more urgent than ever to raise awareness, create community-based solutions and social movements in addition to macro and meso-level advocacy initiatives to protect some of the gains that have been made over past decades.
Although we see progress and development in terms of GDP, infrastructure, technology, connectivity, as well as increased presence and participation of women and girls in the socio-economic spheres in some sectors; however, the stories that we hear from young women and girls from our projects in different parts of the country, still depict a picture of significant inequalities and deprivation. We listen to accounts of the real-life battles some young girls face in their daily lives and how they manage to overcome these hurdles with support and interventions from different institutions, organizations, or individuals. As we celebrate International Womenâsâ day on March 8, reflections of CAREâs work on CEFM bring us back to the purpose of our work, with women and girls at the center of our mission and goal.
Bright school-going Taslima shared, âA simple river crossing separated me from a life of education and living my dreams of being married at a young age.â A student of grade nine of Koikuli village, Taslima was on her way to achieving one of her lifeâs first and most significant milestones, her SSC exams. She has a brother who avails tuitions to help him improve his grades. He crosses a river to go to his after-school tuitions but being a girl, Taslima is not allowed to go there, despite being at the final stage of her studies and requiring further assistance to prepare for the big exam. She has repeatedly explained the need for additional help to her parents, but given the circumstances, they had decided to marry her off as soon as she graduated from grade nine. They further made her feel neglected and distanced by providing their son with a mobile phone. 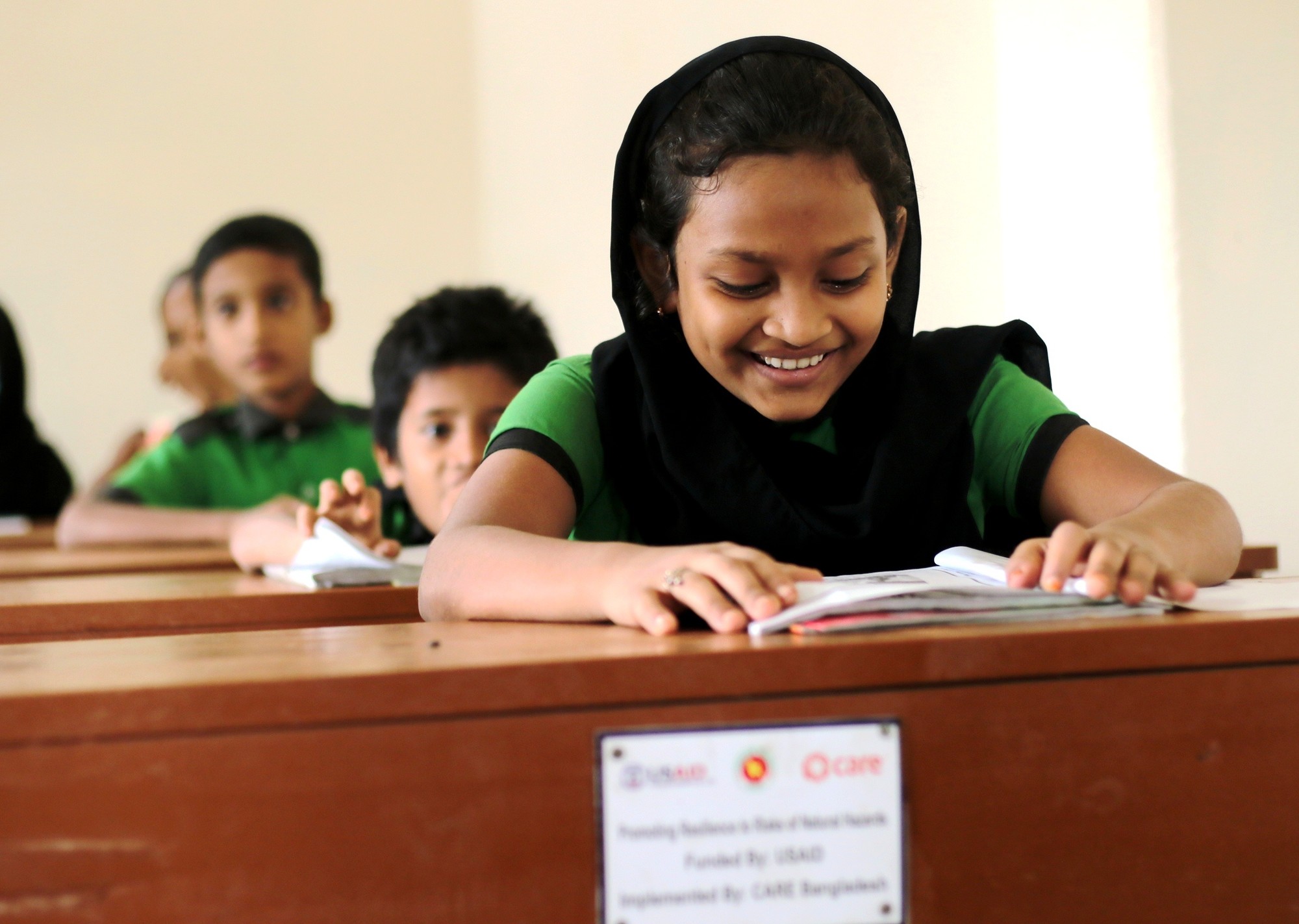 Every girl has right to complete their basic education.
Photo: Asafuzzaman, CARE Bangladesh

Taslimaâs mother was a member of the Mothersâ Group formed by CARE, and through sensitizing sessions, she realized the adverse effects of marrying girls at an early age and soon realized her mistakes. She gave Taslima permission to attend these tuitions across the river and gave her a new phone as well. The siblings now go for after-school lessons together, and Taslima is already planning her studies post her SSC exams. We came across Taslima and others like her through CAREâs Tipping Point Initiative. This multi-country project addresses the root causes of CEFM by centering girlsâ experiences and evidence-based strategies to facilitate transformative change. We work alongside and support movements that seek to expand adolescent girls' voices, choices, agency, and rights. Tipping Point is also working to build on the growing body of evidence and programmatic experience from all the implementing phases to influence positive change on girlsâ rights and CEFM alongside donors, governments, and peers.
Some of our activities entail working with communities to influence and encourage women and girls to fight for preventing CEFM. The key approach here is to empower the women and girls with the right knowledge and messages so that they become their own advocates to fight for their rights. Nasima, an adult female community group member from IMAGINE project in Jigatola, Lengua, Kalmakanda, Netrokona, shared, âIn our village, we prevented a 14-year-old girl's marriage. We formed a group with 4/5 members from the adult female group and 2/3 members from the adult male group when one of our group members heard about the potential incidence of child marriage. Then we went to the victim's house and met with the father of the girl child. We discussed the risks of child marriage and advised the parents not to marry off their adolescent daughter. We also warned them that we would report them to the police and Union Parishad if they went forward with the child marriage. Finally, the family decided to postpone the wedding, and the adolescent girl is now completing her studies in a Madrasha (religious school).â

CAREâs IMAGINE project helps adolescent girls and young women who are already victims of forced marriage to delay the birth of their first child. There were about 60% unmarried girls as members of Girls Collective Clubs (Kishori Clubs). They received awareness-building sessions on sexual and reproductive health rights, gender-based violence mitigation, girls' legal rights, business awareness, entrepreneurship, and future empowerment. Through continuous orientation on these issues, the girls under IMAGINE project became aware and vocal against CEFM and learned to make their own life decisions. The project arranges dialogues in mother groups to raise knowledge on different risks of CEFM marriage and early childbirth so that they would support their daughters in preventing child marriage. By being part of such a discussion, Ayeshaâs mother was able to advocate for her well-being to her father which ultimately prevented Ayesha from falling victim to child marriage.

*Names have been changed to protect identity.